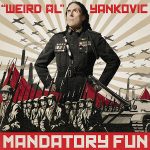 I’ve never really reviewed an album before on any of my blogs, because I don’t buy them. But the one and only exception I have with this rule is music by Weird Al Yankovic. I started listening to his music when I was probably ten or eleven roughly, when someone gifted me the Permanent Record collection. I listened the shit out of those CDs on an old portable CD player than took something like ten double-A batteries that lasted maybe an hour. From then on I began to buy his albums when they released, starting with Bad Hair Day.

So naturally upon the release of Mandatory Fun this week, I grabbed a copy from the local Best Buy and gave it a listen on my long commute home. As far his albums go, you have three major components:

This formula hasn’t really changed through his fourteen albums, nor should it here really. So how does it stack up to his previous work?

Of his four albums released in the 2000s, this one is one of his best works from all three points above. His parody tracks are spot-on and pop culture-relevant, his original tracks are some of the best of his career, and the medley features the most popular songs in the last 2-3 years. His previous albums had strong parodies and medleys, but his originals tended to have a diminishing impact on me as I listened to them. There were a couple exceptions on this album, but as an overall product, it serious is some of his best work.

A brief breakdown by track:

Handy Parody of “Fancy” by Iggy Azalea
Probably my second-favorite track on the album and second-favorite parody of the album. It’s a song about “the world’s most braggadocios [sic] contractor”, but honestly it probably reminds me of every overzealous dude I know with carpentry skills bragging about how well they can screw things into other things. I don’t think I ever heard the original song for this one, but I like how the lyrics match the musical style.

Lame Claim to Fame
An original track done in the style of The Southern Culture on the Skids, it’s a humorous take on people who talk about being tangentially related to or close by celebrities. It’s mainly name drops, so fans of his goofy lyrics will probably not get much here, but if you love celebrity names, you’ll pick out some favorites here. It also features the obligatory Six Degrees of Kevin Bacon joke.

Foil Parody of “Royals” by Lorde
If you live in Connecticut and listen to Jim Vicevich, you probably hear him sample Lorde’s Royals often when lampooning liberal politicians. But Weird Al goes back to his food roots with Foil, using it to talk about wrapping up food, and fashioning a hat to combat government conspiracies. Being not the full song length with only two verses, I put it at a tie with Inactive for the parody tracks on the album, mainly because Inactive is also another food/fat parody. But it has a great video.

Sports Song
A school marching band-style song that puts lyrics to a fight song of sorts, insulting the opposing team. I imagine this will get some play by e-sports teams before DOTA matches. It’s not terrible from a lyrical point-of-view, but isn’t particular outstanding either.

Word Crimes Parody of “Blurred Lines” by Robin Thicke featuring T.I. and Pharrell Williams
The best song and best parody on the album, not only does it capture the original song pretty well, the lyrics are spot-on for making fun of people who are terrible at grammar, and will probably get a lot of play by English teachers. The music video is also spot-on.

My Own Eyes
A style parody of Foo Fighters, it depicts someone’s encounters with bizarre events during his day, much like Everything You Know is Wrong from Bad Hair Day. One of the better originals on the album, though possibly because of the style.

NOW That’s What I Call Polka!
The obligatory polka medley samples popular songs such as “Wrecking Ball” by Miley Cyrus, “Gangnam Style” by Psy, “Somebody That I Used to Know” by Gotye, and Thrift Shop” by Macklemore & Ryan Lewis. It’s one of his best medleys playing off of his last album’s medley. I think he sampled all the right tracks here, as opposed to Straight Outta Lynwood which I felt had the weaker sampling of that time.

Mission Statement
A style parody of Crosby Stills & Nash, it’s the song you will play for your next Stakeholder’s Meeting and it will capture every word likely to be said.

Inactive Parody of “Radioactive” by Imagine Dragons
Food/fat parodies are a staple of Weird Al’s work, so it’s easy to ignore this one if you’ve heard the rest, but on the merits of the musical style, he nailed the original song’s feel pretty much spot-on, even more so than Tacky or Foil. So even though it was lower for me on the parody list, it’s one of my closer favorites album-wise.

First World Problems
A style parody of Pixies, it lampoons the “First World Problems” meme. Lyrically, I didn’t really get many of the references, they seemed more like stupid people problems than first-world problems, but overall in the album, it was easily the weakest track.

Tacky Parody of “Happy” by Pharrell Williams
Otherwise known as “Hipster” it’s a humorous look at people who think dressing crazy and acting like an idiot is a positive lifestyle choice. The music video also features Lana grabbing her tits.

Jackson Park Express
The obligatory “long song”, and style parody of Cat Stevens, it’s a nine-minute song about a guy on a bus imagining how he would interact with a woman sitting across from him. Compared to Albuquerque and Trapped in the Drive-Thru, it’s more of a dud similar to Genius in France, though it has some humorous lines. It still manages to be more interesting than First World Problems though.

Best Buy has the album for ten bucks, so grab it while it’s cheap. I know, me buying CDs. Trust me, it’s rare.

This entry was posted in Originals and tagged Entertainment. Bookmark the permalink.