After obtaining the Nexus 7 last Fall, I began to eye a replacement for my aging workhorse, the Samsung Galaxy S2. LG and Google’s release of the Nexus 5 was leading the front of the pack for me, moved by HTC’s ailing product line, Samsung’s useless bloatware additions to the Galaxy line, and no real interest in anyone else. Given my experience with Google’s fantastic Nexus 7 ride, going with the Nexus 5 seemed like a done deal.

Google’s Nexus line has always been at the top of the Android experience, but marred by hardware development. From HTC, to Samsung, and now LG, the consensus among those I speak with about the Nexus line acknowledge that the move to LG does cross into some mysterious territory compared to the familiar Samsung line of products. But honestly, I am not too bothered by this. Hardware is hardware mostly, but various manufacturer’s implementations of Android have always been the hot-button issue for those who don’t prefer the conformity of Apple. Samsung has TouchWiz, HTC has Sense, and both have their pros and cons. The Nexus line offers a pure Android experience, first in line for updates before carriers and manufacturers get their hands on it. As someone who was frequently frustrated by Samsung’s lack of timely support for their devices, this was also an appealing factor. 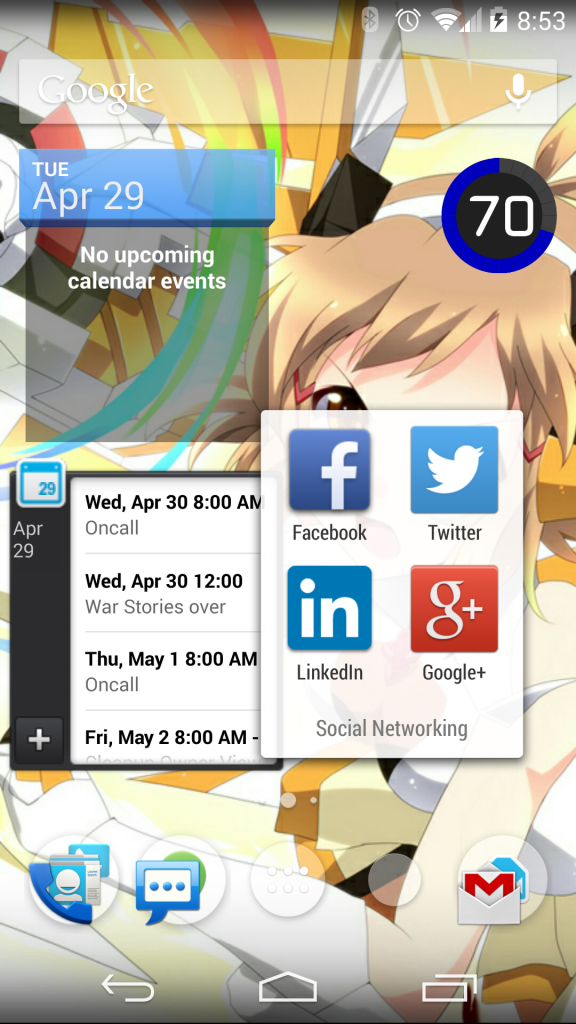 If you’ve used the tablets, the phone experience will be roughly the same with KitKat. Lock screen, camera, Google apps, everything is right down the middle in terms of usability. That made setup easy. Also, as with the Seven, the icon folders are one of my favorite features of KitKat. I like keeping clean home screens, but in previous versions of Android, I kept a few icons on the main screen or one-left/one-right screens for things like Facebook or Poweramp. With the Seven, I keep all of my most-used apps in the launcher grouped in folders by function. But with the Five, I only have four slots instead of six, so I have a screen full of other folders at the moment until I figure out how else I want to structure it.

So how does it stack up against my tried-and-true S2?

Battery Life
Sort of a no-brainer really. A 2300mA battery versus a 1800mA battery is pretty much guaranteed winning, but it really depends on the battery life. Early on in the S2’s life, when it was still running Gingerbread, it got amazing battery life, almost 9-12 hours with minimal usage. I went to a custom Ice Cream Sandwich ROM about a year into its life and the battery was horrible, dying in barely a third of the time. I reverted back to GB and actually kept it up until the Samsung official ICS release, which improved, but not by much. I ended up owning two batteries and a myriad of charging devices to keep my battery charged during longer trips. I bought several apps to perform battery analysis during all of this and found a number of different apps cause an unnecessary number of wakelocks throughout the day, some system apps, and others Samsung apps I didn’t want. Going to a proper bloatware-free ROM might’ve helped, but after a lot of experiences with my old Moment pre-2011 and having random reboots, freezes, and radio issues, I didn’t feel like killing my primary communication device to experiment with things to find a permanent solution. I stuck it out. Hopefully with this phone, I can get a few good years out of the battery before it starts to degrade.

External Storage
Predictably, like its tablet counterparts, the Five has no external microSD storage. This is one part cost-savings by LG and Google, and another Google pushing cloud services such as Play, Drive, and Music. The lack of external storage hasn’t affected me on my tablet, because I don’t really keep much data on it, but with my S2, I was actually using a 32GB microSD for music since I lost my Zune years back. Combined with Poweramp, an excellent music player for Android, I’ve actually embraced the single-device experience many people asked me why I wasn’t doing this years ago. But with no storage, I’m now looking at the logical progression from local music playback to cloud services like Spotify, Google Music, Pandora, and Digitally Imported. 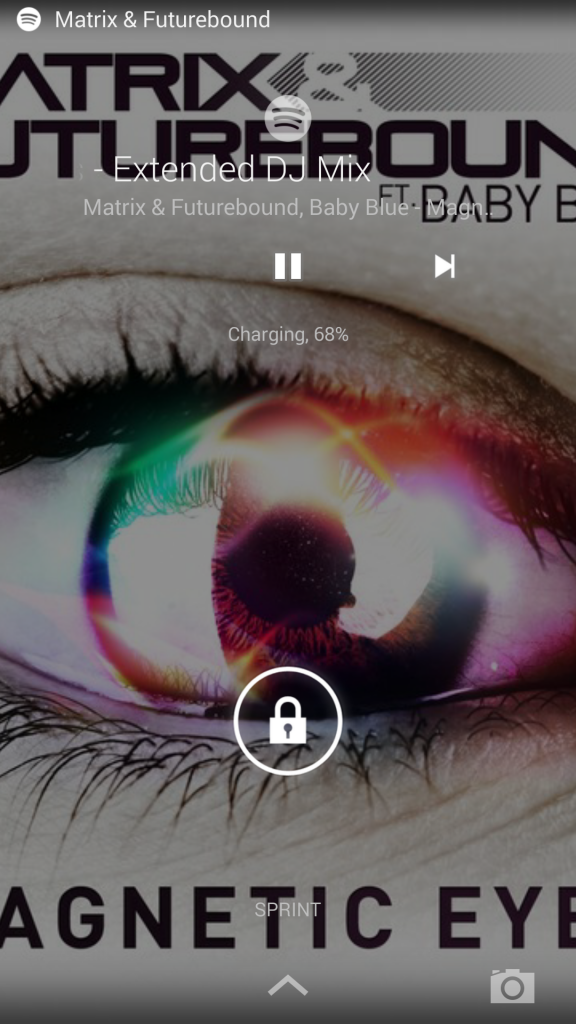 Suffice to say, with 4G LTE and Bluetooth integration on my Mazda, this actually works out pretty well for my long and boring daily commute. I’d like some options of local playback in no-signal areas or when I don’t want to use my data, but with only 16GB of local storage though (I didn’t spring for the 32GB model), I won’t be able to store a whole lot, even cached. Minor issue I suppose. I’ve actually thought about converting my old S2 into an MP3 player of sorts, especially if it is possible to shove a Galaxy S Player ROM on it, since they were similar models.

GPS and Maps
My S2, much like my Moment, started out strong with handling navigation and maps, but by the end, struggled to maintain a lock and became incredibly frustrating. Much of this was due to Google’s advancement of the software where the hardware couldn’t hold up, but dropping the phone a few times likely didn’t help. I actually tested my phone and my tablet on a drive home once with Waze and found the tablet maintained a lock the whole way where the phone gave up somewhere in West Hartford. I actually haven’t put the Five through full paces yet, since I don’t have a mount for it, but I imagine it will probably work as well as the Seven did. As long as it can maintain a lock, really.

Google Now and Voice
The big new feature of KitKat was voice integration. Taking away from Glass, Google implemented a system that using voice and the “Ok, Google” prompt, allows you to search, call, text, and other functions with your voice, at virtually any time. It’s a neat feature, and it actually got on my S2 towards the end of its run, but it was so badly integrated with Samsung that it would spaz out and throw up keyboards, menus, and otherwise lock me up to the point where I would have to screen off and on to regain control. Fortunately it’s much nicer on the Five and works very well for sending text messages. I’m not sure how to get it to play well with the Mazda’s Bluetooth, since they have their own system that doesn’t default to the phone’s for dialing, and it does not support texting. My wife’s Motorola Roadster 2 would probably rock this phone well, since it supports her S3’s S-Wave application for voice control. 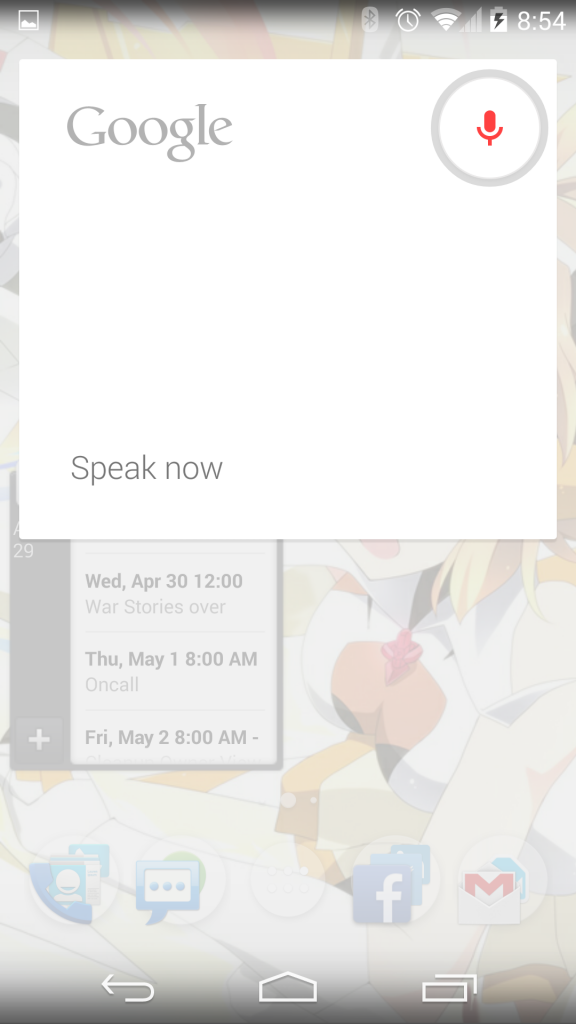 So what about some other stuff?

Cost and Competitor Comparison
Since my phone was bought through Sprint and subsidized, the cost for me was fairly negligible, but considering I had my choice between the Samsung Note 3, the Galaxy S4, or god forbid an iPhone, I could have went a variety of ways really. The major turn-off for the Galaxy S4 was my bad taste with some of the worst features of the S2, being TouchWiz, as well as the bloatware. Certainly the S4 has some slightly better specs, like better battery, better camera, and a microSD slot, but compared to the Note 3, that blows all of them out of the water, but it large and more expensive. Like the Seven, the Five will not be the best hardware kid on the block, but it will charm those who want a top-shelf device for a low-shelf price. Included wireless charging and Gorilla Glass are also pluses. If you’re an iPhone user comparing specs, all three of these phones will probably surpass the 5S in many ways, but the effect varies as each runs a different version of Android where Apple’s iOS is consistent and mostly-optimized for the hardware.

KitKat
I started using Android with the Samsung Moment shortly after the release of 2.0 Eclair. Since then, it’s been a wild ride of trial and error with Samsung devices and implementations of Android. KitKat, fortunately for me, has been a Samsung-less experience as I use it on both of my Nexus devices exclusively, minus a custom ROM I did for the S2 briefly. My favorite feature is still the launcher, but things like the dialer, contacts, mail, overall look and feel, and other UI improvements are much sleeker than previous versions of Android, and definitely better than pre-4.0 versions of the OS. That said, the notification bar on the Five is not split like the Seven, and I feel that should be changed. I know you can reach the button from the first menu, but the split actually worked for me with their new notification layout. So unless I missed how to tweak this, it should be considered for the phone side. Edit: Apparently the number of fingers dictates which menu you pull down, one for notifications, and two for settings. I can live with that.

Apps
Most of the apps I have been using remain in-use. Handcent continues to be my favorite text app, mainly for custom backgrounds and sounds. JuiceSSH, ES file Explorer, MX Player, and others are still in-use. The one thing I have not done yet is unlock the bootloader to root and explore things like Wifi Tethering, which I most certainly need back on my phone post-S2.

Overall, the Five is an excellent phone so far, and I am hoping to get the same experience out of it that I have gotten out of my Seven tablet thus far. Plus, I look forward to the next Android update to see what they have in store for us, hopefully some additional improvements to voice and other features for hands-free communication while driving. Since I live in a state where holding your phone can get you pulled over, I’d like more features to be able to manipulate it remotely or through other devices that integrate with my car’s controls.

Or maybe they need to design a car around the phone. This is Google we’re talking about.

This entry was posted in Originals and tagged Technology. Bookmark the permalink.