One of the best parts of any Top Gear episode is listening to the Star in a Reasonably-Priced Car talk about their car history, which for most British folks ends up being something classically British followed by a Porsche 911, and for Americans it is a shitty Honda followed by a dozen BMWs or Volvos, unless they’re from the south, and then it’s trucks and American muscle cars. The best stories always end up in people crashing their cars, going out on a binge and getting arrested, or not knowing shit about cars.

A brief (car) history you can skip if you don't give a shit
I tend to fall into some sort of cobbled-together mess of those, minus the expensive cars, of course. My car history has been colorful at best. I started with a Chevy S10 truck, which I drove illegally a couple times in Indiana before we moved to Connecticut, in which I got my permit proper and was eventually licensed to drive. I drove it to work, school, and Scout summer camps and outings. It was very handy for hauling around goods, but not very slick in picking up chicks or looking cool in a town of rich kids, BMWs, and Audis. I had wanted the 1995 Dodge Stratus that my mother drove before my parents divorced, but that was held for my sister, who later wrecked it.

Instead, I went to a 1998 Pontiac Grand Prix. Frankly, I loved that car, probably the most fun I’ve driven until now. It ate gas for breakfast, and had many mechanical issues over it’s lifetime, but I got it at 88k and retired it at over 180k, so it was a pretty reliable run albeit it’s last few months. It made the trips to Otakon 2003 and 2004, Katsucon 2004 and 2005, and a number of other points west and south.

I traded up to a Jeep Grand Cherokee I got second-hand from my mother, but in the second week of driving it, a kid came around a corner too fast and collided with me and another car, totalling mine. Lacking the fund for a new car, even with the check from the old car, I proceeded to go on public transit for the better part of a year until I could afford a new car. That car was a 2002 Dodge Neon. At 34k, it was really the sort of car that fit my style, fast when it needed to be, but fairly reliable and decent on gas. Reliable came to be an understatement though, it suffered more mechanical problems than any other car I’ve owned. Spark plugs popping out of the engine, the transmission fluid hoses coming out of the radiator, brakes, calipers, CV boots, tires, oil, just about everything failed at one point or another. I managed to keep it together for eight years, but at about 122k, I finally jettisoned it for a new car, right as the windshield cracked from the last winter storm.

For my next car, I was torn between something fuel-efficient, and something cool. My dream is to be able to drive the many cars most men of my caliber want to drive, an WRX STI, RX-7, Skyline, and so on. Sadly, payments and insurance would kill me. Instead, I began to look into hatchbacks. I don’t have kids, so buying a van or an SUV is still years away. I travel mostly alone, and if not alone, my wife and/or my dogs. So it made sense to go with a smaller vehicle both for that, and to satisfy the need for speed. I was between a Mazda3 hatchback or a Ford Focus hatchback. I also considered Mazda3/Mazda6 sedans, a Ford Focus sedan, a Toyota Corolla or Camry, or at the bottom of the pack, a Ford Fiesta. What I did not want was anything Chevy, because screw them and the bailout, Honda, because I am not a ricer/modder, Nissan because I have been less than impressed with everything they made, and Dodge because of my trouble with the Neon. Everything else, Kia, Hyundai, and so on, was sort of neutral; I don’t love or hate them, but I have never driven one.

I’ve never been one to count on “first sight” when it comes to big-ticket items. I am someone who spends a lot of time researching everything on what I buy when it comes to things I have to take loans out for. It’s not like just walking in the store and buying a kind of cereal and throwing it out if it’s not good, if I buy this car, it has to be good for at least enough time before I could potentially sell it or trade it for something else. So I spent many days going through sites like Carmax and dealers around Connecticut. I saw a number of cars that were pretty cool, some loaded with gadgets and whistles, others with moon roofs and heated seats. All lovely, but I had a price range of 13-16k to play with, so that eliminated a lot of potential choices in the brand-new category, like the 2013-2014 Mazda3 hatchbacks with SkyActiv, or the new Focus ST that were 20k+. So the focus went to 2010-2012 cars in that range that had decent mileage that I could afford. So when I went through dealer websites and found Liberty Mazda in Hartford, I looked through their used inventory and this one came up. 2011, 19k miles, a little over fifteen thousand. Seemed too good to pass up. So I went down last Friday night and asked to see it and test drive. 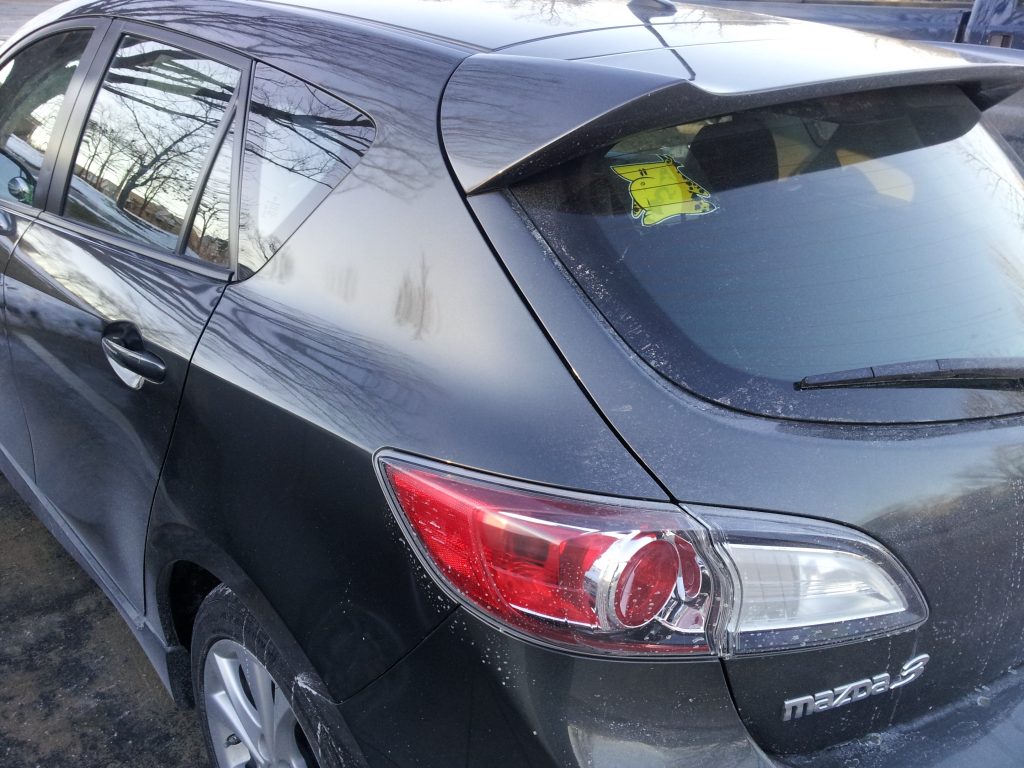 One thing you should know, is that I’m not outwardly social. I walk into Best Buy just to browse and have to turn down six floor employees, because for one, I don’t need their help, and for two, I probably know more about the products they sell and what they do, than they do, with the exception of maybe washers and dryers. But when it comes to cars, I am not shy to admit I only know the basics, like checking fluids, tires, and some light repairs. Add this upon the fact I’ve never bought a car from a dealership, and it goes to show I was about to embark on the magical journey some enjoy and others loathe. But I had no qualms with my experience here. My sales associate, Ken, was an incredibly awesome guy who told me all the ins and outs between the newer and older Mazda3’s, helped talk me out of the Mazda6 by showing me the size difference, and let me test drive the car up and down the HOV lane on 91 to get a feel for it on the highway. Being late in the night though, I felt the need to sleep on it. I hadn’t personally looked at any other cars. I felt sort of guilty pulling the trigger on the first car I find without looking at others. But I looked at the other sites and listings, and nothing came close to what this one was offering, and they link up with the bank my loan was coming from. Seemed like a win-win.

So I went in the next morning and pulled that trigger. It took the better part of all morning to get things straightened out, but by the afternoon, I was driving a 2011 Mazda3 S hatchback. It was a little fun having a car that I could not feel going 90mph. The amazing part was we were due to leave for Massachusetts that afternoon to get a puppy we adopted, so I ran right up against the clock with trading my old car in for my new car, because I chose to get the EnviroGuard applied to the inside and outside, which took a little longer to process. Fortunately the business manager, Justin, and the folks in the service department did an awesome job prioritizing me and getting me squared away quickly, especially since I forgot to bring my title and the DMV hadn’t shed my old bank’s name off of the Neon. They lent me dealer plates to get through the weekend until I could square it away on Monday and get my plates on the car. It’s the kind of customer service experience I enjoy from those I deal with, especially on big-ticket items like cars.

As for the car itself? It’s a lot of fun to drive. Coming from a 2002 Neon ES, the immediate pickup and drive from a ~170HP I4 is pretty intense. It will easily hit sixty quickly, and you often don’t even feel it. I did sissy out and get the automatic transmission, but it has the tiptronic-like manual setup where you can flip over the shifter and change gears while driving. I’ve found that to be fun in traffic or other times. Typically I use lower gears in the snow and ice. I’m not sure if fuel consumption is saved using manual gears in traffic similar to manual gearboxes, probably not much. I will have to science that myself in due time. Handling is also pretty spot-on for a car its size and weight. It’s smaller than my old car with a slightly shorter wheelbase, so I am feeling the corners much more, especially with sharp corners. Braking is also pretty sharp, especially since they put new brakes and new tires on it before it sold, so that was a good deal. 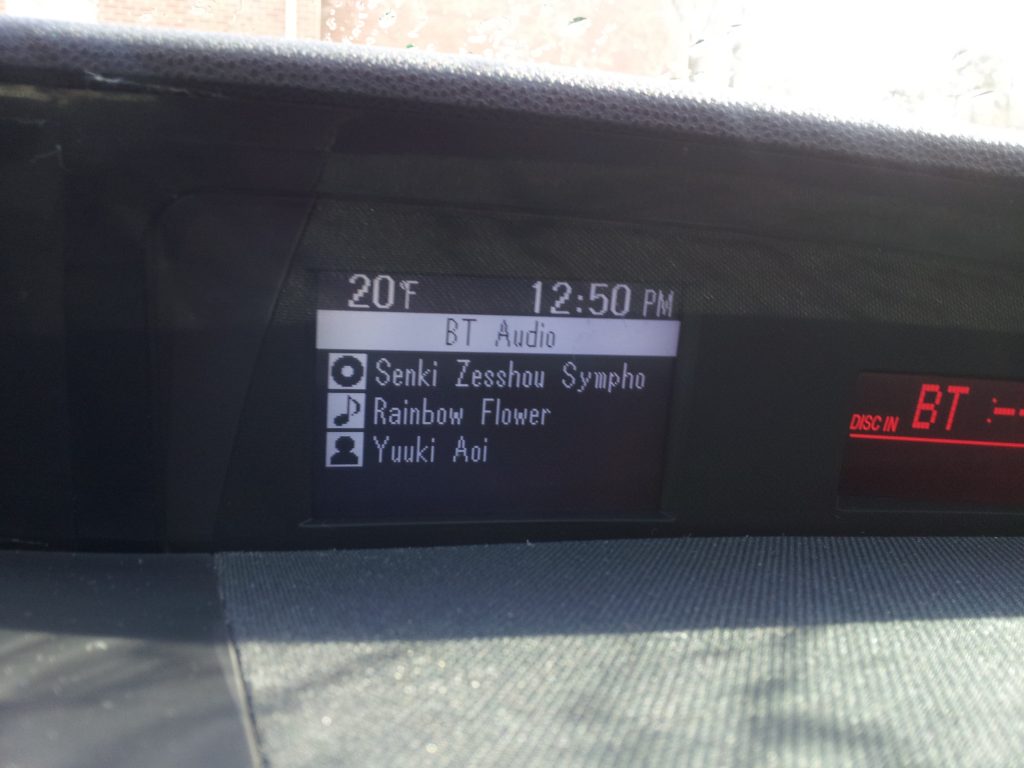 Electronics… as much as I would have loved the tech packages on some of the Mazda3 and Mazda6 sedans, they drove the cost up, so I got the standard layout for the hatchback. Still, it’s your standard AM/FM radio and CD player which can play MP3/WMAs from CD, but it also sports an AUX jack for 3.5″ connected devices, and Bluetooth for both phone and music profiles. So as you can imagine, I had a blast setting up my Galaxy S2 to interface with the Bluetooth, make and receive calls, and play my music off my phone. I was glad I did not buy a new FM adapter as I wouldn’t need it. The audio quality on BT is excellent, as is the audio on all other sources. BT music playback does decide to pause the music if I keep skipping songs, usually after the second or third skip, which I’ve only found resuming to hit the play/pause button on the center of the stereo console. It also does not support any sort of browsing of tracks in a playlist or album from the steering wheel controls, which I assume is either simply unsupported, or it doesn’t understand how to interface with Poweramp, the app I use for music on my phone. I did not test it with the stock music player, so the jury is out there. I will be switching to the Nexus 5 soon anyway, so we’ll see how different that makes everything there.

Overall, it’s an excellent car for someone like me who drives solo more often that not, and wants to be slightly cool about it. I imagine that when I have kids and need a larger vehicle, if my wife’s car isn’t traded up, mine will probably go to a CX model SUV or something else if I don’t stick with Mazda. Right now it’s just us and our dogs, and the EnviroGuard protection was specifically requested by me because of them. I’m hoping to keep this car looking pretty awesome for many, many years. Because it deserves that much, especially when I am paying for it.

But how many people buy a new car and go get a puppy that proceeds to try to barf all over your new carpet not once, but twice? 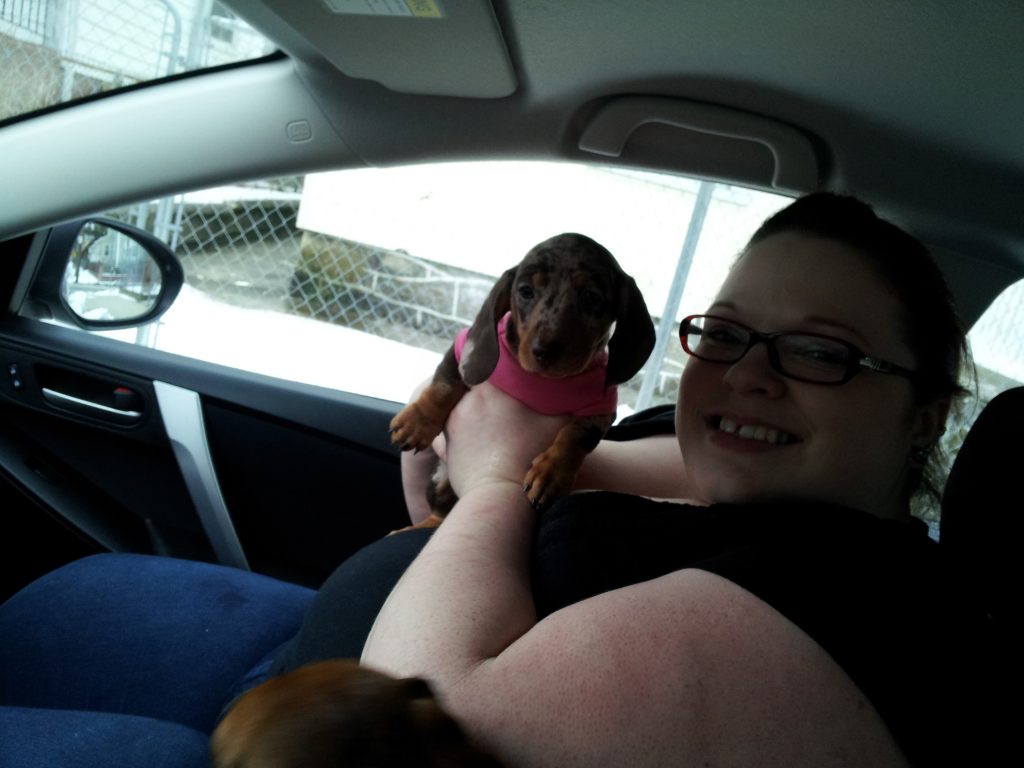 This entry was posted in Originals and tagged Technology. Bookmark the permalink.