Having gotten a little fed up with the post-update woes from Stock ICS for my Galaxy S2 I decided to finally cross back into the custom scene. After reviewing several roms, I decided to give Rujelus22’s Blu Kuban for ICS. The blue theme caught my eye, but as I read into the features and what he did, it looked pretty attractive. So after fussing with getting a custom recovery and everything on it, I flashed over a couple nights ago and have it almost set up to my liking. It’s pretty nice, so I figured I’d write a short bit about it.

The obvious feature off-the-bat is the blue theme. It’s blue. Very blue. He went through the trouble of not only theming the entire screen and menus blue, but even themed most of the Google applications like GMail, the browser, Youtube, etc. Combined with the funky futuristic font from ICS on the lock screen, it makes for a pretty nice presentation up front. I am running the latest version based on FF18, the most recent OTA kernel from Samsung, but the main differences out of the box are the lack of TouchWiz, and all of the Sprint bloatware. Gone, and replaced by Apex for a launcher and only the core Google apps and a couple others. It’s also missing Swype for your keyboard by default, but using a neat package distro system built into the menu, you can not only re-install that, but other programs you prefer, including TouchWiz, or sample other mods and apps chosen to work well with the ROM and for general use. All it requires is a download and reboot, and that’s pretty slick. I found myself installing Swype, changing the battery display, and getting the clock back on the notification bar. 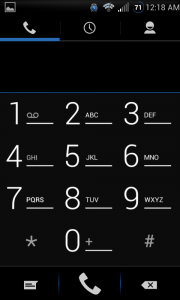 Apex by default loads three home screens, but you can add and shuffle around seemingly as many as you need. The app drawer scrolls vertically, offering a 5×5 grid of applications that can be moved onto the home screen, or placed in the lower dock. The dock itself holds four icons on the main screen, but can be slid left or right to reveal more dock space for five more icons each for a total of fourteen icons, but if that’s cool, you can also “stack” icons into groups on the dock, letting you add more icons, and name them appropriately. So on mine you’ll notice the Dialer and contacts are grouped, and GMail and EMail are grouped. Tapping those will bring up a small menu with your label and both icons for choosing. By the time I finished configuring it, I found no need for placing icons on the home screens really, unlike TouchWiz which could only hold four. On my home screen I have a few widgets up, notably ClockWidget for ICS to emulate the same style as the lock screen clock, Accuweather for weather, and the calendar widget that came with the phone. I also have the paid versions of Battery Monitor and System Tuner that I use to track my battery and CPU/Memory stats. I haven’t decided how to style the other screens, I typically don’t use many widgets or home screens, so all I’ll likely use the other screens for are icons and mail widgets perhaps. The GMail/EMail widgets that come with this ROM are pretty slick. 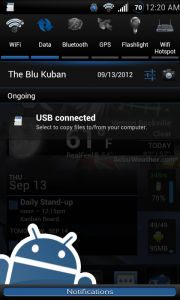 A lot of little things make it known this is a custom rom. The boot screen is custom, and can be changed within the ROM update menu, and the notification pull-down screen has an animated Android guy who winks at you, that can be changed as well. Even the android guy you can grab on the lock screen can be changed. The nice thing about custom ROMS, and Android in general, is that there is an endless amount to customization to it if you want. While I use my phone for business and personal, I like “ricing” it out a little, since I don’t own a car and the skills to rice said car out. But some of the functionality in Blue Kuban are also improved. The stock email app for example actually pulls the folder structure from an Exchange account correctly, something I lost in the move to ICE Official. I’ve yet to figure out how to get calendars to sync over correctly, but my daily stand-up meetings seem to go over, which allows me to set my co-worker’s ringtone for daily stand-up meetings to go off when the meeting starts. Always good.

Overall, it’s a well-polished ROM, and the icing is definitely it’s special features under-the-hood that let you customize it and tweak it to your liking. He even offers an easy-mode for swapping modems from a popular list of modems which I’ll be delving into next to try to get back to the golden age of EL29-or-better 3G/4G speeds. The wifi issue seems to be an issue still I think, though it only seems to be when I am home, so it could be my network. There is also a tweaks section for messing with the CPU governor, which I haven’t played around with much yet, but it allows you to change the way the OS uses the two cores in the phone, usually either “ondemand” that keeps the second core offline until needed and the main core throttled according to usage needs, or another setting that changes it up. This would affect battery life because the less the CPU has to be used, the better, and I was dealing with something using the CPU constantly on the old ROM.

So if you’re looking to switch into the custom ROM scene, this is a good starter-pokemon to play with. As with all custom roms though, you should read a lot of posts and understand how flashing custom recovery, kernels, modems, what not to do to avoid bricking your phone, and other things to not brick your phone. XDA has a lot of good resources for getting anyone interested started, and honestly, even if you aren’t into customization and themes, running a custom rom is good to get that Sprint bloatware off your phone which improves your battery life. For people scared Sprint will void their warranty or call them heathens, you can always flash back to the stock, unrooted version of any official rom and make it appear you’ve never done anything to it at all. So there ain’t much to lose and so much to gain. Hell, if you own a Google Nexus device, your bootloader is already unlocked. Go nuts.

This entry was posted in Blog Dot and tagged Technology. Bookmark the permalink.

2 Responses to The Blu Kuban