After about a full month of usage, I’ve begun to conclude that I am not as impressed with Ice Cream Sandwich as I thought I would be, but I don’t think this is really Google’s fault so much as it is Samsung and Sprint, because they have yet to achieve a successful OTA update without some glaring show-stopping bug. Kind like our software at work. Maybe I should complain about their testing procedures? =D

Some people may think I defend Samsung against Apple or other companies, and I do love my SII, but Samsung isn’t known for treating the support of their devices well, at least in my opinion. Sprint also doesn’t fare well with this sort of thing either. But while my ICS experience has been fairly positive overall, a few glaring issues have been encountered, and I ain’t all too happy about some of them. Behold: 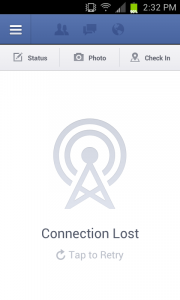 Get Out of Bed, Wireless
The biggest issue with my phone right now is my wifi. When it turns on, it connects and works for awhile, and then the connection drops. The wifi stays on, you can see the icon there, but if you attempt to connect to anything, it does not work, and if you check the phone status, you see it tell you the address is Unavailable. What? The only real option here is to toggle it off/on, but seriously, why? I googled around and found some closely related examples, such as it not renewing itself with the DHCP server, or some other odds and ends. I tried setting it to a static address and see if that was the case, but the issue persists. At best I can tell, it sounds like when the phone goes to sleep, the wifi goes to sleep, and doesn’t wake, so when you go to use it, it gives you the finger and hits the snooze button. I suspect this is the main reason my battery is draining faster, because applications looking to get data in and out think the wifi is active when it is not, causing them to be stuck. 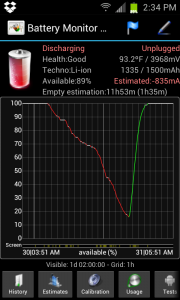 You Don’t Need to Use THAT Much Battery
When I was running Gingerbread, I pulled the phone off the charger around 8:30am each morning and put it back on the charger around 11-12am that night. That is about sixteen hours on battery a day. Now on a typical day I send a couple of text messages, check email, and play music on my commute to and from home. On average I consumed about 20-30% of my battery during the work day, so by the time I got home, it was about 70-80% and would go from there depending on what else I did. Mind you my GMail is set to push (is there even any other setting?) my work email was set to push during peak and 1 hour off-peak, FB, Twitter, and Seesmic set to check every hour, and anything else either off or checking in hour+ intervals. My screen settings were mid-brightness, slightly longer screen-on time than default, and I’m always on wifi at work and home.

Under Ice Cream Sandwich, with about the same settings, except I set work email to manual peak and one hour off peak, my battery goes down to about 40-60% by the end of my work day, same usage. Now I know if I make a couple calls, or data it up hard, among other things, I’ll pull the battery down faster in either scenario. I have Battery Monitor Pro, I keep track of my battery stats and make adjustments to the system as needed to save battery if I need it, but I don’t like inconsistency, I like knowing how much battery I should expect to have for the level of usage I’ve made to the device. So that means either ICS is terribly inefficient with battery, some Sprint bloatware is messing with my phone, or the wifi issue from above. 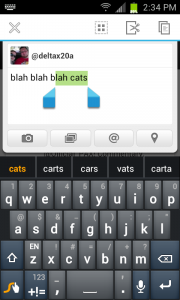 Copypasta
Either I’m just not getting the “new way” of doing it, not paying attention, or something, but copy and pasting text seems to be a chore in this. I’m not sure if it is ICS or Samsung’s SenseUI but I have to finger my phone in illicit ways to get a block of text copied, and this is how I roll FB and Twitter updates, I copy from one app to the other. The result is I post on Twitter less, or re-type what I want, because it’s faster. What is up with that?

Where Mah Gees At?
Maybe it’s just me, but I can’t help but feel that my 3G/4G is slower now compared to before. I used to watch Google Play downloads come down quickly over wifi or 4G, but now it takes longer. This could just be a new radio, I’ve read a lot of ICS hackers have been playing with different radios to achieve a faster speed on the gees, and perhaps I should research this and look into following suit.

So as you can see, it’s a lot of little things that I see as more being operational faults on Samsung’s part than I do Google. The hardest part of Android is the different companies and hardware profiles, and I don’t expect the world, but there are enough Galaxy SII’s out there that Samsung can test and beta test and make sure some of these issues are corrected, and if an issue occurs, get it resolved as quickly as possible. I’m sure they dislike the modding community, but when it comes to quick responses and quick fixes, the people who are part of XDA, SDX, and ACS, are better about supporting my phone than Sprint and Samsung, and these companies should take better note of an operating system being supported by the open source community.

That said I’ll probably make the switch from the stock rom to a custom rom this week and see how it goes. It’s been almost a year now, the stock has served me well, but it’s time to see what is beyond the rabbit hole.

This entry was posted in Blog Dot and tagged Technology. Bookmark the permalink.